Annual report of the Netherlands Court of Audit for 2018

2018 was the year in which the Netherlands Court of Audit strengthened its staff establishment again following the reorganisation in 2017. The government decided to increase our budget to bring it more into line with the performance of our statutory duties. As from 2018, the additional budget awarded to the Court will increase in steps from an extra 1 million in 2018 to an extra €3 million per annum as from 2022. We used the additional funds to make significant investments in the recruitment, training and development of our staff during the year. We recruited, inducted and trained 57 new members of staff.

Increase in staff numbers in 2018 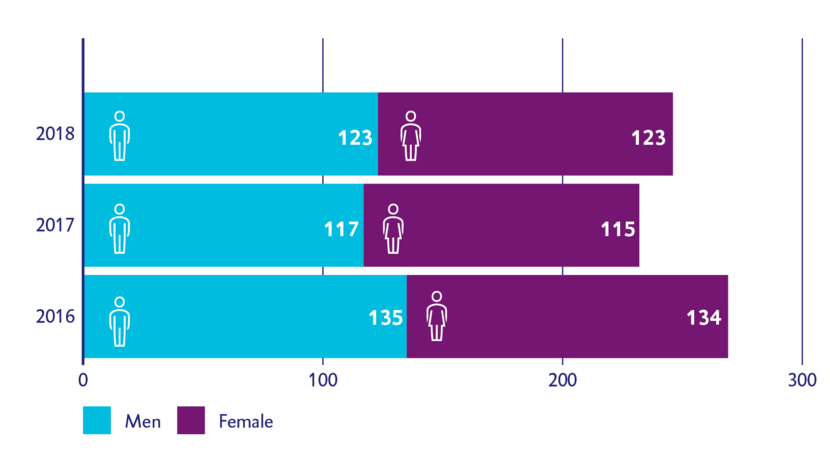 We issued 58 publications in 2018: 36 audit reports, 21 letters to the House of Representatives and 1 update of a web dossier. Of the 36 audit reports, 21 concerned the 2017 Accountability Audit of the ministerial expenditures, operational management and policies presented in the ministries’ annual reports. (In 2018, we audited the annual reports for 2017, hence the title Accountability Audit 2017.)

New: what did the auditees think about our audits?

The 2018 Annual Report pays special attention to eight audits we carried out during the year. For the first time, the Annual Report includes short interviews with auditees. They present an insight into the impact of our audits on the people and organisations concerned in a particular economic area or policy field.

The other five audit reports to include interviews were:

What joint projects did we carry out in 2018?

In the Sharaka programme we work with supreme audit institutions in partner countries in the Arab region. In cooperation with our Sharaka partners we have been working for more than three years on a review of the national preparations for the UN Sustainable Development Goals (SGDs).

The Palestinian supreme audit institution on the Sharaka programme

Lana Assi, Head of Public and International Relations of the State Audit & Administrative Control Bureau (SAACB) of Palestine: “The partnership with the Netherlands Court of Audit and the six audit institutions from the Arab region was very inspirational and successful.”

The Court of Audit was again active in regional and global umbrella organisations in 2018:

What did the audit of central government cost in 2018?

Personnel costs: the Court of Audit spent €26.2 million on personnel costs in 2018, equal to 86% of our total expenditure. We spent approximately €3.2 million, about 12%, on external workers. This is far more than in 2017 and higher than the government standard of 10%, but we had to hire external people in order to make up for understaffing and ensure the Court’s further development as an organisation.
Other expenditure (€4.4 million) related to assets, such as ICT and communication systems, services and resources.
We again incurred reorganisation costs in 2018; they actually increased from €1.3 million in 2017 to €1.5 million in 2018.
The published figures are provisional. We will publish definitive figures on all our expenditure in our open data file on Accountability Day 2019.