The 2015 refugee crisis prompted the Court of Audit to investigate the facts and figures surrounding the asylum inflow in the period 2014-2016. The number of asylum seekers jumped sharply in 2015 after years of moderate inflows.

Failure to comply with EU agreements on sending back asylum seekers 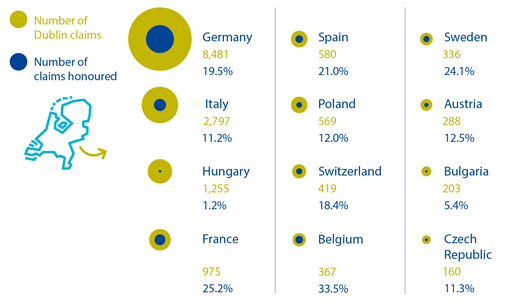 Why did we audit the asylum chain?

The 2015 refugee crisis prompted the Court of Audit to investigate the facts and figures surrounding the asylum inflow during the period concerned.

What standards and methods did we use in our audit of the asylum chain?

Asylum procedures hinge on decisions about individual people or families who have their own refugee stories. It is important that these individual procedures are conducted correctly but sometimes things can go wrong. Our audit was not carried out at this level, however, and we therefore do not express an opinion on the conduct of the procedure in our report.

We tried to find patterns in the procedural data about asylum seekers in the Netherlands. We requested quantitative data on asylum seekers from various organisations involved in the asylum chain. We used the data to walk through the process that asylum seekers must take from the moment they arrive in the Netherlands until the moment they are granted a residence permit or their application is rejected and they leave the Netherlands. To put the outcomes of the data analysis into context, we held interviews with officials from several organisations involved in the asylum process. We also studied parliamentary documentation and third-party studies.

The State Secretary for Security and Justice responded to our audit on 23 May 2018.