Lessons learned from the JSF project

Lessons can be learnt from the Dutch government’s involvement in the development and procurement of the F-35 Joint Strike Fighter (JSF). On the eve of a new series of military procurements by the Minister of Defence, the Netherlands Court of Audit, which has been following the process for more than 20 years, has mapped out 11 lessons.

In its Lessons from the JSF report, the Court of Audit summarises the lessons learnt from its audits of the biggest procurement of defence materiel ever so that they will be of benefit to future decisions. The government already has a lot in the pipeline, including 30 or so projects to procure all manner of materiel, from submarines and frigates to army vehicles, for a capital outlay of between €6 and 17 billion. The Minister of Defence will have to meet the substantial operating costs from the current budget for the deployment of weapons systems and other materiel.

Many new procurement projects in government’s current term of office 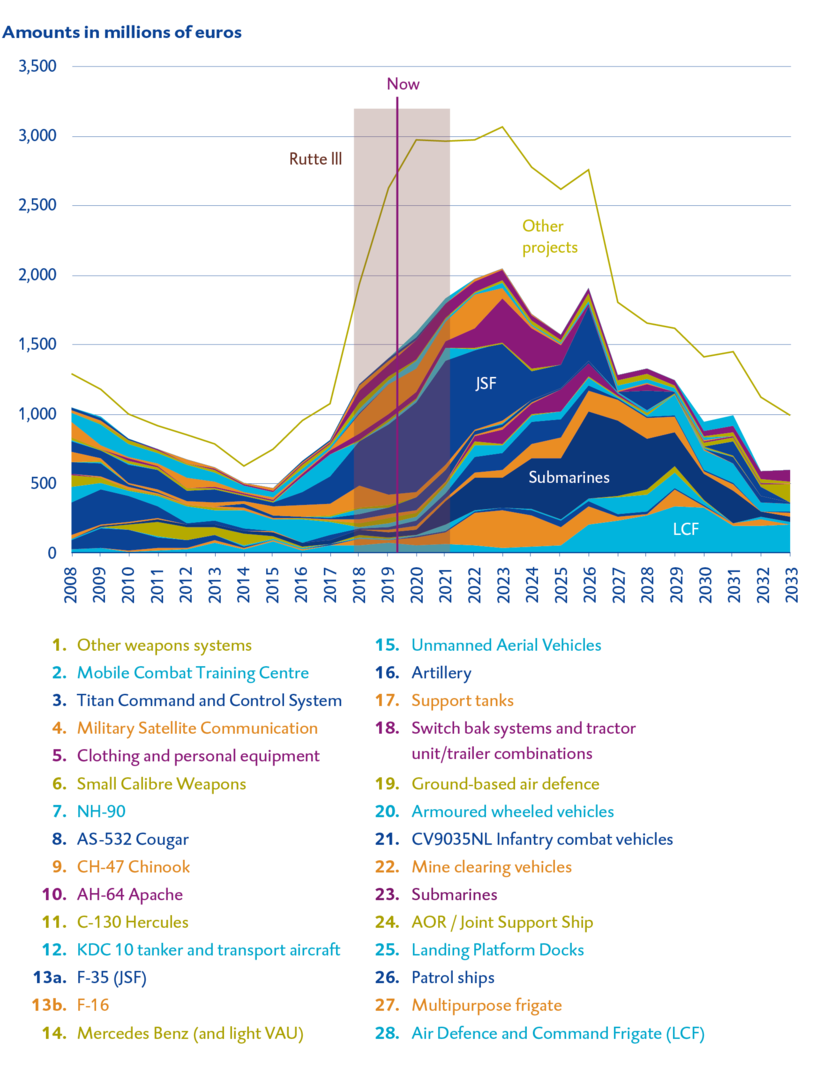 The figure above shows the planned investments in weapons systems (2018 prices). The Ministry of Defence published such a statement until the end of the 2018 budget as an annexe to the Draft Budget. The statement shows the capital outlay for the armed forces’ 27 largest weapons systems, plus an 18th “residual group” looking back five years and ahead 15 years. We have presented the figures in a graph. Each layer represents one weapons system. He expenditure on the JSF is shown in blue in the middle. It can be seen that major investments are planned in submarines and frigates as well as the JSF.

What were the results?

We have learnt 11 lessons from the twenty years we have been auditing the Netherlands’ participation in the development of the JSF and its subsequent procurement of the fighter aircraft. An important lesson is that if parliament wishes to retain control over such projects it must remain alert from the very beginning and in every step.

The report also casts new light on the usually complicated and extensive process of procuring defence materiel. Such programmes are often considered to be unique but our audits have found that three elements should always be borne in mind. Firstly, the Ministry of Defence’s regulations on the selection of materiel costing more than €25 million, which divides the process into five orderly stages. Secondly, the dynamism inherent in an international programme to develop defence materiel. In the JSF programme, the Court of Audit writes, the Netherlands, as a partner in an international process, could “choose to get on the bus or simply watch it drive past”. Thirdly, political support for the investment and its huge financial demands must be sustained throughout the project’s long lead time.