In the Annual Report 2017 we account for the results of our work last year.

The Netherlands Court of Audit carried out a sweeping reorganisation in 2017. It was prompted by the new strategy presented in 2016 on the one hand and by the budget cut imposed on us by the government and parliament on the other. The reorganisation led to the departure of many members of staff. In combination with the customary decline in publications around the general election and the formation of a new government, it meant we issued fewer publications in 2017 than in previous years.

Decline in number of publications in 2017 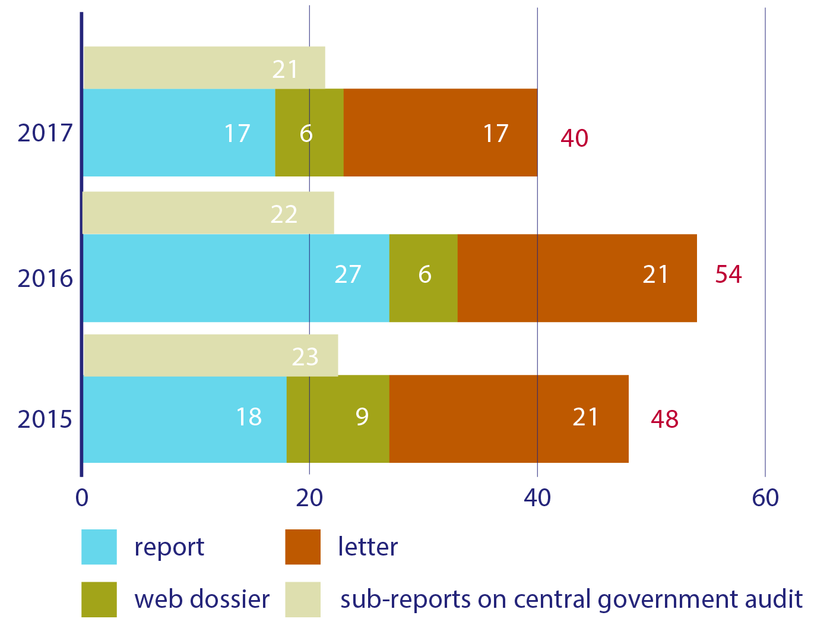 In our strategy for 2016-2020, Trust based on understanding, we said we would give higher priority to explaining how public money is used and our audit outcomes would seek to clarify the social impact of policy decisions and expenditure more emphatically than in the past. Our aim is to strengthen the public’s trust in democracy. As well as auditing central government, in keeping with our strategy we paid particular attention in 2017 to:

We issued publications on all these priority areas in 2017.

We issued 40 publications in 2017. We experimented not only with new audit methods and techniques but also with new forms of publication. We issued our first focus report: an audit carried out in a short period of time with a strictly defined audit question and a report without recommendations to the government.

Conference on the future of public real estate

Following a successful first edition we organised the second Accountability Hack in June 2017. The Hack is an initiative of the Court of Audit, the Open State Foundation, the House of Representatives, Statistics Netherlands and a number of ministries. During the ‘hackathon’ nearly 100 programmers used open government data to develop new apps or websites to show how public money is spent. Data owners, policymakers and other interested parties who attended the day discussed the importance of open data.

We published 17 audit reports in 2017. We also sent 17 letters to parliament and published six updates of web dossiers. All the publications we issued in 2017 are listed on our website.

Two of the audits are considered below.

During the financial crisis, the government intervened in order to rescue banks using public money. One of the causes of the crisis was poor supervision in the EU by national supervisory authorities. The rules have since been tightened up and the European Central Bank (ECB) now supervises all significant banks. Medium-sized and small banks in the Netherlands are still supervised by De Nederlandsche Bank (DNB). We audited DNB’s supervision of the banks and the Minister of Finance’s supervision of DNB’s public task.

Our audit found that DNB supervised the banks intensively and strictly. It set higher capital requirements than the minimum required under EU rules. We also concluded that the Minister of Finance’s supervision of DNB was limited and far from proactive.

In 2017, we also audited how the civil integration policy was being put into practice. We carried out this audited on account of the disappointingly low pass rate for the civil integration exam in June 2016. The number of people who passed the exam within the set timeframe is considerably lower under the current regime (Civil Integration Act 2013) than under the previous regime (Civil Integration Act 2007). We identified the causes and made recommendations on the basis of data analysis and a case study.

What were our joint projects in 2017?

We were active in several regional and global organisations in 2017:

Workgroups within these organisations exchange knowledge and carry out joint audits. In December 2017, for example, we published an audit report jointly with four other audit institutions on the supervision of medium-sized and small banks in five European countries.

On request, we maintain long-term institutional partnerships with the supreme audit institutions of various countries and regions. We occasionally carry out joint audits with some of them and share our knowledge and experience.

We have been active in the Arab region through our Sharaka programme for several years. We help audit institutions in our partner countries improve the functioning of public administration and financial management in the Arab region. Teams from the institutions carry out their own audits and development projects with the assistance of staff from the Court of Audit. Where possible, the Arab teams also assist each other so that the team members can learn from each other’s experiences.

Cooperation within the Kingdom

In 2017 we undertook a variety of activities with local audit offices and audit committees. We rounded off our joint audit of the social domain – where care and social security tasks have been devolved from central government to local authorities – with our publications in the audit of central government 2016 and our budget letters.

What did the audit of central government cost in 2017?

More financial and operational management information is provided in chapter 6 of the Annual Report 2017.