An audit of access to long-term care. This focus audit looked at the facts surrounding access to long-term care under the Long-Term Health Care Act (WLZ). Many conflicting stories have been spun from various studies, media reports and debates in parliament. Concerns include the complexity of access and the different responsibilities of central government and the municipalities and care insurers.

The likelihood of someone receiving care under the Long-Term Care Act (WLZ) is not affected by the municipality in which he or she lives. The Care Assessment Centre (CIZ), which deals with the cases, assesses all applications in a consistent and impartial manner and does not base its decisions on where the applicants live. If a municipality has a policy to fast track people to the WLZ, it will not work.

To carry out its audit, the Netherlands Court of Audit analysed applications and rejections from before the WLZ came into effect in 2015 until the end of 2017. In total, it examined 163,551 ‘first’ applications (it did not consider re-assessments). Of the applications examined, 17% were rejected. To place its findings in context, the Court also interviewed 30 experts from the care sector: municipal policymakers and implementers, client support staff and personnel from the CIZ.

The data analysis found that the applicant’s age was a factor in the likelihood of receiving long-term care under the WLZ. The audit report states that the younger the applicant, the less likely it is that he or she will receive care under the WLZ. Furthermore, it is striking that over the years it has become increasingly unlikely that young people will receive care. In 2017, 35% of all applicants under the age of 18 were refused care. In 2015, only 28% had been refused. The increase might be due to a transitional regulation that applied to young people receiving assistance under the Exceptional Medical Expenses Act.

Three-quarters of WLZ applicants have psychogeriatric or somatic complaints 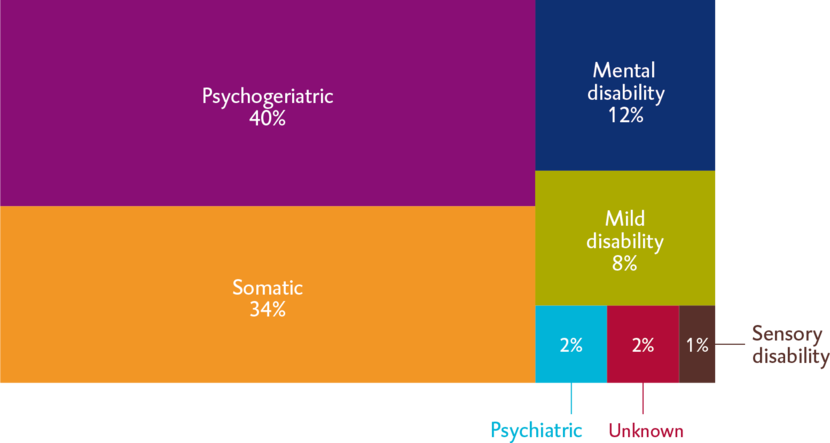 The audit found that CIZ performed its role as gatekeeper objectively, as intended. The assessments rejected more young people and psychiatric patients because of the statutory conditions on eligibility for long-term care.

The first condition is that there must be:

Secondly, it must be clear that the patient will require or be able to rely upon permanent care 24 hours a day for the rest of his or her life because a recovery or improvement in the situation is impossible. The first condition excludes many psychiatric patients from the care. The second makes it difficult for young people to receive care because their situation may improve.

The Court of Audit thinks the likelihood of qualifying for long-term care under the WLZ will improve if a district nurse or other care provider helps the applicant complete the application.

The Court of Audit decided to focus on problems in the access to long-term care because they are a hot topic in the public debate. It is generally thought that some municipalities fast track their residents to apply for long-term care. This is known in the Netherlands as ‘bypassing’. The system is said to be too complex, with responsibilities spread among too many players. Central government, the municipalities and care insurers are all responsible for long-term care. As a result, people are sent from pillar to post between the municipality and central government.