Hilversum in View, The Efficiency of the Dutch Public Broadcaster

The Dutch Public Broadcaster (NPO) is responsible for coordinating the programming of all public television, radio and online channels in the Netherlands and for the distribution of the broadcasting companies’ content. The Netherlands Court of Audit has investigated the efficiency of public broadcasting. Its main conclusion is that the NPO cannot fulfil its statutory task of spending its budget efficiently. The NPO receives €850 million in public funds every year from the budget of the Ministry of Education, Culture and Science (OCW) but it has little insight into their efficient use.

As the greater part of the NPO’s programming budget is spent on television output, the Court of Audit looked at the value for money of national television programmes in the Netherlands.

No demonstrable relationship between funding, programming and value for money

The NPO allocates programming funds to the broadcasting companies (such as AVROTROS, EO, WNL and NTR), who are then free to redistribute the money to programme makers. This is one of the reasons why the NPO has little insight into the efficiency of the public funding of programmes.

Furthermore, the broadcasting companies’ independence is not fully recognised in the law. The NPO’s performance is compromised by doubts and divisions within the organisation about what its role should be. The Media Authority is too remote to assess the NPO’s efficiency.

Viewing figures, ratings, the quality of programmes and target group reach are measured but no demonstrable relationship is established between the money and the programmes. For the NPO, however, value for money is an important metric to allocate funds to the broadcasting companies, yet it has no objective criteria to strike the right balance between the economic use of public funds and the required impact of the media output. Revenue and costs are systematically analysed only when the rights to broadcast major sporting events are acquired. The broadcasting companies are also uncooperative; they do not provide the NPO with information on how much their programmes cost. The NPO therefore does not have the financial information required under the law to manage efficiently.

Weak negotiating position, also when programmes are contracted out

The NPO is not systematically critical of the cost of successful long-running programmes such as Radar, Nieuwsuur, Boer zoekt vrouw, Studio Sport and Kassa. It is therefore not in a strong position to negotiate lower costs with the broadcasting companies. It did enquire why the cost of the talk shows Jinek and Pauw had risen but it was unable to negotiate lower costs.

The broadcasting companies spend 35% of their programming budgets on external productions: €193 million in 2018. They are in a weak position in negotiations with the external producers of successful programmes, as illustrated by the rising cost of Wie is de mol?. External productions can have advantages but also entail considerable efficiency risks. The cost of contracted programmes per broadcast hour is far higher than the cost of the broadcasting companies’ own productions, but it is not clear whether the programmes represent better value for money. The Court of Audit’s investigation found, for example, that the cost of the television programmes College Tour and Floortje naar het Einde van de Wereld had risen substantially when they were contracted out to external producers. The latter programme was contracted out to a company owned by the presenter herself. Contracting arrangements make it more difficult to determine the presenters’ fees. This, too, increases the risk of inefficiency. 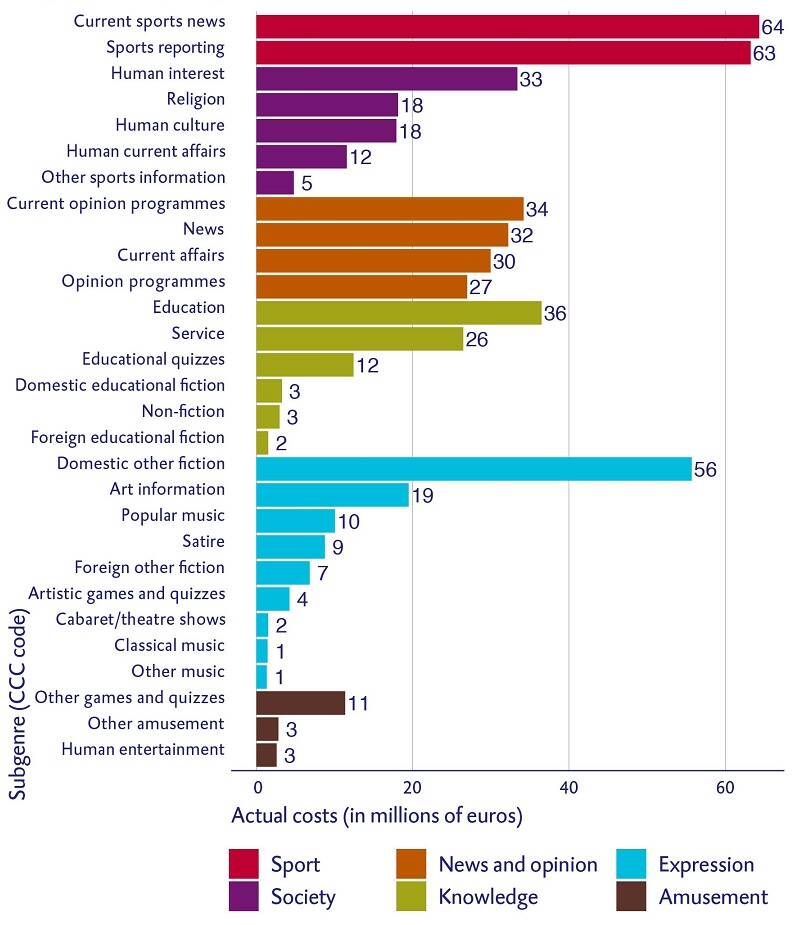 The information the Minister for the Media and the House of Representatives receive on television programmes is divided into six general genres. They and the public are therefore not informed of changes in their cost. Three genres (expression, society and entertainment) have become less expensive in recent years but the cost of the news and opinion genre has risen. Neither the minister nor the House were informed that the increase was due solely to the opinion programmes. The figures are sometimes influenced when a programme is moved from one genre to another, as was the case when Heel Holland bakt was moved from entertainment to expression.

The Court of Audit’s report provides more multiyear information per genre on the absolute cost, cost per hour and cost per viewer.

We recommend that the Minister for the Media, the NPO’s Executive Board and the Media Authority improve both the transparency of programme costs and the efficiency of public broadcasting.

What methods did we use in our audit?

To carry out this audit, we requested and studied documents on policy preparation, implementation and day to day practice from the Ministry of OCW, the NPO and the individual broadcasting companies. We also held interviews with dozens of people involved at these organisations.

Why did we audit public broadcasting?

National public broadcasting plays an important role in today’s information society. The public must be confident that the information the NPO broadcasts on its various platforms (television, radio, internet, social media) is reliable and not politically motivated. Programmes must be made independently and they must be able to criticise the government.

The Minister of OCW provides approximately €850 million to the national public broadcasting organisation each year so that it can fulfil its tasks. It is required by law to provide a high-quality media output for all sections of society. The law also grants it a great deal of discretion, provided it uses its budget economically, efficiently and effectively. The NPO must provide the best possible public output at the lowest possible cost. This was the subject of the Court’s audit. The Court asked two main questions: What does the NPO spend its money on? and Was the NPO improving the efficiency of its use of public funds?

The audit was published and presented to the House of Representatives on 10 December 2019. The Minister for the Media, the NPO’s Executive Board and the Media Authority responded to the findings by letter. Their responses were published with the audit report.