If the United Kingdom leaves the European Union without reaching an agreement on its withdrawal, it would cost the Netherlands €1.6 billion in the next two years. Furthermore, a no-deal Brexit would increase government expenditure by an additional €700 million, bringing the overall total to €2.3 billion. An investigation by the Netherlands Court of Audit has found that the government is intensively preparing the public and private sectors for the consequences of a no-deal Brexit since 2016. However, not all the problems that will arise will be resolved on time. Customs, for example, will not be fully prepared on the exit date of 29 March 2019 for all the extra work it will have to carry out.

The Court of Audit examined the government’s preparations for the potential consequences of Brexit in a number of scenarios. The worst case scenario will occur if the UK parliament does not approve the agreement that the prime minister, Theresa May, has agreed with the European Union. The government has been preparing for this scenario because it will have the greatest impact on the Netherlands. If the agreement is approved, Brexit will have little impact on the Netherlands in 2019 and 2020.

The financial consequences of a no-deal Brexit for the Netherlands would amount to €1.6 billion in 2019 and 2020. The Netherlands, like other member states, would have to make a higher contribution to the EU budget in order to compensate for the loss of the UK’s contribution. In the longer term, its contribution would also increase without Brexit, but not by as much. The Dutch contribution to the EU will be €1.25 billion higher in 2021 and approximately €2.5 - €3 billion per annum higher as from 2026. If the UK leaves the EU with an agreement, the amount stated for 2021 will on balance be €0.5 billion lower. 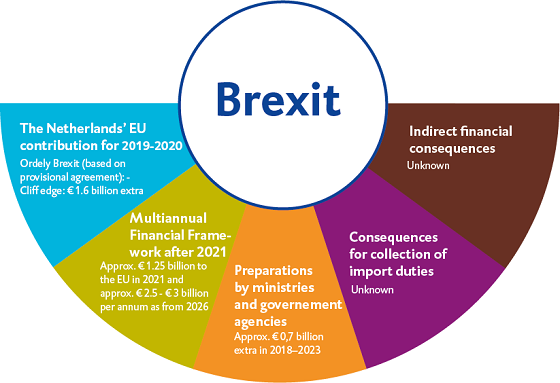 In addition, the government is reserving nearly €700 million for the period 2018 – 2023 for various government bodies that will be affected by Brexit. Both Customs and the Netherlands Food and Consumer Product Safety Authority (NVWA), for example, will need to be strengthened in order to carry out the additional work caused by a no-deal Brexit. The audit also revealed that the government has not yet identified all the potential costs to the Netherlands. There is no insight into Brexit’s impact on trade flows and thus on the loss of import duties. The economic consequences for businesses and their impact on the budget, such as lower tax revenues, are also not known.

Impact of Brexit on Customs

The audit found that Customs would not be fully prepared for a no-deal Brexit on 29 March 2019. It must therefore set priorities on the capacity at its disposal and the enforcement activities it does and does not carry out. In a no-deal scenario, Customs would need an additional 928 FTEs. The Court of Audit found that Customs thought it would have recruited just 300 FTEs by 29 March 2019 and some of them would not have completed their training. The recruitment and selection of new Customs officers has been delayed by the lack of trainers. Customs, moreover, still has to make preparations to adapt its premises, modify its IT infrastructure and procure scanners and other equipment to deal with the extra workload of a no-deal Brexit.

Following a no-deal Brexit the United Kingdom would no longer be a member of the EU Customs Union and customs formalities would be reintroduced for goods imported from and exported to the UK. Customs would therefore have to be able to carry out inspections at ferry terminals. The audit found that Customs had analysed the resources and investments that would be needed to carry out the inspections. Customs would also have to seek the support of the ferry companies but it is uncertain how much these private actor would be willing to contribute to the investments necessary in the ports.

Response of the minister

The government wrote in response to our audit that we were correct to conclude that Customs would not be fully prepared on 29 March 2019. On behalf of the government, however, the Minister of Foreign Affairs noted that he thought at least 500 FTEs would have been recruited and 300 of them would have been trained and would be fully deployable by 29 March 2019. After the Court of Audit closed its audit on 31 July 2018, the Ministry of Finance released new projections of the number FTEs. The Court of Audit had been unable to verify the figures. According to the government, Customs will not have recruited the 928 additional FTEs necessary to deal with the consequences of a no-deal Brexit.